The proposed Geopark is located in the Chinijo Islands and Lanzarote. They are oceanic volcanic islands whose particular geographic location and favourable climate allow us to observe on the surface a wide range of highly well preserved sedimentary and erosive volcanic structures, which are rare and hard to find on other oceanic volcanic islands. The lack of rainfall, all-year-round similar temperature, winds and lack of vegetation bring together the necessary conditions, along with geological features with a long-term basis geological substrate, to make this Geopark a true outdoor museum. All its geological features make for magnificent educational resources that help us understand the different processes that form the landscape we see here. This region has been a resource for tourism and local development for a long time. There are complex volcanic structures, monogenetic volcanoes, lava flow with all possible types of morphologies, large volcanic tephra, steep cliffs, valleys, beaches, dunes and fossils among others.

<<Lanzarote “The Volcanic Island”, occupying the north-eastern part of the Canary Islands, is 125 km from the African coast, and just 7 km from Fuerteventura. The island has a long irregular shape, and and runs along a northeast southwest axis, its surface area is 845 km2 and has a maximum altitude of 671 m in the Famara massif. On the north of the island there is a group consisting of five islets called “Chinijo Islands”: La Graciosa, Montaña Clara, Alegranza, Roque del Este and Roque del Oeste, with irregular topography while the most abrupt relief is in the north (Famara) and south (Ajaches), where there are deeply formed ravines and steep cliffs. The rest of the island consists of low-lying beach areas.>>

Geo-dynamic frame of the Canary Islands

The Canary Islands are situated on the interior part of the African tectonic plate over a passive continental margin, within a geodynamic intraplate context, formed on top of a Jurassic-period lithosphere (150-180 Ma) (Hayes and Rabinowitz, 1975; Verhoef et al., 1991; Roest et al., 1992). The base of the islands is formed by an oceanic-type crust (Uchupi et al., 1981; Dañobeitia, 1980; Banda et al., 1981). These are large individual volcanic constructions whose surface is the summit of underwater materials that can reach a height of up to more than 4-5 Km.

The Canary Islands were formed, on their first base, by the gathering of underwater volcanic materials towards the end of the Cretaceous Period and start of the Tertiary (Robertson and Stillman, 1979; Watkins and Hoppe, 1979) followed by a period of subaerial materials circa 20-30 Ma (Abdel-Monem et al., 1971; Coello et al., 1992; Cantagrel et al., 1993; Balogh et al., 1999) mainly formed by effusive eruptive mechanisms, although many volcanic constructions have been the result of explosive and hydromagmatic volcanism.

Simplified geology of Lanzarote and the Chino Islands

Lanzarote has been built, almost exclusively, with basaltic materials, during three periods of volcanic construction; an underwater one and two subaerial ones. During the first phase, the Oligocene, the base of the island was formed by underwater volcanic materials, plutonic and sedimentary-style rocks. During the Mio-Pliocene and Pleistocene-Holocene periods, there were two different phases of subaerial volcanic activity separated by a period of no activity at least 2.5 Ma, during which the oldest Mio-Pliocene volcanic structures were exposed to continuous erosion that formed its original shape (fig. 1). 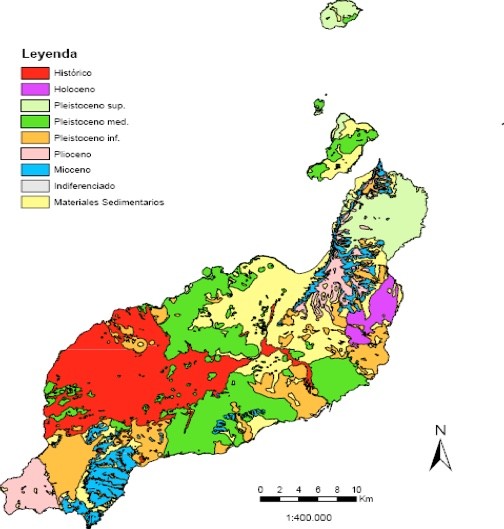 The beginning of the formation of the island

The volcanic construction on the surface leans on a base whose structure and features are known for the use of a geothermal sounding that goes through the island to a depth of around 2702m (Sánchez Guzmán and Abad, 1986). This sounding revealed that the base of the stratigraphic column in Lanzarote is formed by sedimentary materials, especially finely stratified clay and clay soil, and which have abundant underwater micro fauna remains from the Middle-Late Palaeocene whose current position makes us think of a possible lifting of the oceanic base of around 4 or 5 km.

The first volcanic materials on the island of Lanzarote are supported on this elevated block from the sea bed, and started to form towards the end of the Eocene or beginning of the Oligocene Period. Therefore, this is the most ancient geological unit on the island, formed by a group of sedimentary, volcanic and plutonic rocks, through a sub-vertical network of dams so thick that it sometimes consists of 90% to 100% of the rocks. These first materials make up the volcanic series that correspond to the underwater formation period of Lanzarote.

The first subaerial period started around 15 Ma, with periods of varying duration and significance, separated by periods of inactivity, going as far as back as 3.8 Ma (Coello et al, 1992); and characterised by the significant eruption of high volumes of basaltic materials. These materials pile up and form large volcanic constructions such as Ajaches and Famara, or smaller ones such as the one in Tías (Carracedo and Badiola, 1993) (fig. 2). 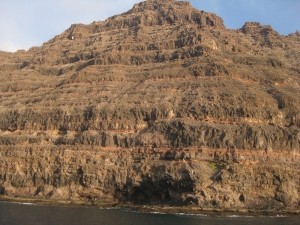 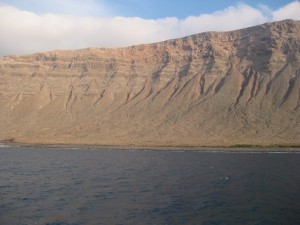 Figure 2. Superposition of lava flow and detritus slopes in the Famara massif

The materials in this period may be considered the frame of the island, and represent its period of highest subaerial growth (Ancochea et al, 1993), with the highest eruptive rates of the construction of the island’s block, 0.01-0.02 km3/ka (Coello et al., 1992). The constructions in this period originated from a complex tabular sequence of basaltic lava and tephra mainly and softly heading towards the southeast and east southeast, with some outcrop of well-differentiated trachybasalt and trachytic.

The second subaerial period comprises the recent activity on the island during the Pleistocene Holocene. It is characterised by the generation of vast lava fields that cover the materials from the previous period and for having most of the emission centres aligned northeast southwest. This period started around 2 Ma and lasted the whole Quaternary to the present day. The eruptions during this period took place throughout the territory, affecting ancient massifs as well as the central sector of the island, although different to the materials from the first subaerial period, and following the well-defined spatial organisation guidelines, orientated northeast southwest, east northeast and west southwest.

The islets of the Chinijo Islands originated during the Pleistocene and are mainly formed by basalts and basanites generated by hydromagmatic eruptions (De la Nuez et al., 1997).

This second cycle had a generally continuous volcanic activity from the end of the Pliocene until the present day, with eruptive rates that are much lower than those during the previous period, 0.013-0.027 km3/ka. The emission of alkaline rocks that later evolved into basaltic magma, with a decrease in alkalinity ending up emitting tholeiitic olivinic basalt, mark this period of formation (Armienti et al., 1989; Carracedo and Badiola, 1993).

During the initial stages of this second subaerial cycle, the volcanic activity seemed to be limited to the interior or periphery of the two large volcanic massifs, with numerous volcanic formations in Ajaches, in Famara and the area surrounding the massif in the south and southeast near Teguise. Subsequent volcanic activity brought about the formation of less significant volcanic alignment of monogenic constructions, more or less parallel to each other and with preferential orientations northeast and east northeast (Coello et al., 1992).

During this period, there are two significant historic eruptions: the Timanfaya eruption that took place from 1730 to 1736, and the treble 1824 eruption that led to the formation of the Tao, Nuevo del Fuego and Tinguatón volcanoes (fig. 3). Both are fissured multiple events, which in Timanfaya’s case led to a complex set of eruptions resulting from multiple simple volcanic constructions throughout a largely developed longitudinal fracture; during the 1824 eruption, a linear eruptive system was put in place, with three separate eruptive formations, of very modest dimensions. 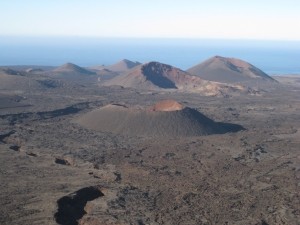 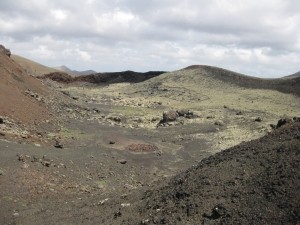 Despite the fact that Lanzarote is the island with least frequent volcanic activity if we look at the number of eruptive events it has had, it is however, the island where the most significant and highest magnitude eruptive processes have taken place compared to other islands throughout history (Romero, 2003). Taking into account the total number of eruption days —2141 days amount to 78.8% of the total active days within the archipelago—, as well as the surface covered by volcanic materials —representing 73.4% of the total area affected by the historic eruptions on the islands—. This is therefore, the Canarian island with the greatest historical importance of volcanic activity which has had the highest impact on the island and its landscape.